We’ve told Brighton and Hove City Council that the gates appearing in Brighton must be removed and a better solution applied that doesn’t prevent cycling.

Our Campaigns Officer made the case at the Environment, Transport and Sustainability committee in January.

Our deputation with text and photos is here.

The gate below is at the junction of Natal Road and Dewe Road near the University of Brighton’s campus on the Lewes Road. It is permanently locked. No consultation was carried out on its placement. Not good enough! 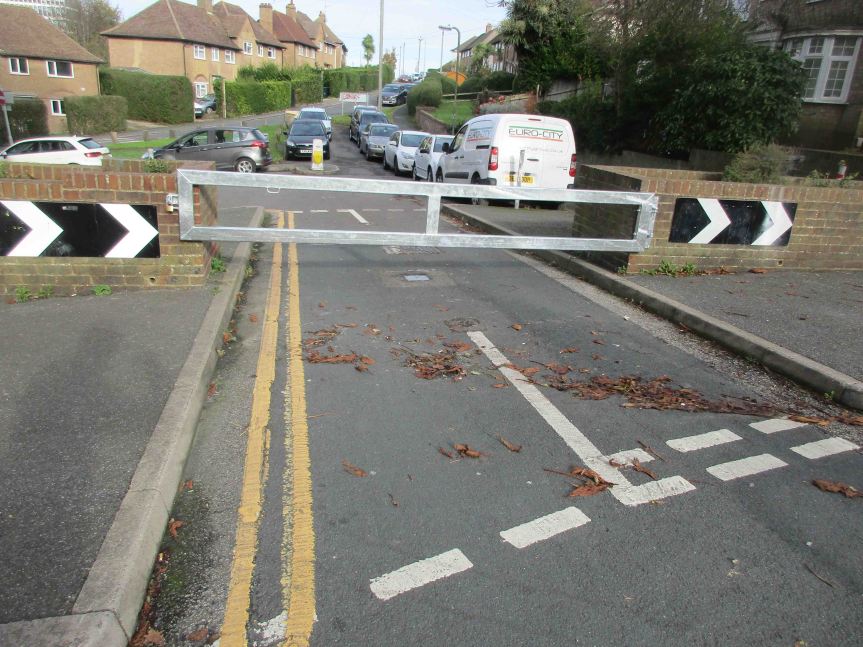 “Bike It Brighton” is on Sunday 7 June 2020 at Preston Park Velodrome, Brighton.

Brighton Housing Trust’s flagship cycling event is returning this year with a new name and look, and new, exciting activities planned for the day. Join us for Bike It Brighton on Sunday 7th June 2020 at Preston Park Velodrome and play your part in combating homelessness across East Sussex. Choose between a 60 mile or 30 mile challenging ride across the South Downs, or a family-friendly cycle on Preston Park Velodrome. There will be food and entertainment throughout the day at the Velodrome. Join us and help someone who is homeless get the support they need to find a place they can call home.

Find out more and register here

The organisers are also inviting charities to partner with them for this event to help raise money for local causes. Charities can purchase places in the event in blocks of five. They particularly welcome smaller charities in the Sussex area to come on board. If you are interested in becoming a charity partner then please contact fundraising@bht.org.uk

Use this simple template to respond about transport in the South East before the January 10th deadline! It will save you from filling in a long questionnaire. If we don’t respond and this regional body sticks to its preferred strategy, cycling and walking will drop by about 13% or more in the South East! The link above takes you to Friends of the Earth’s website where you can respond easily. 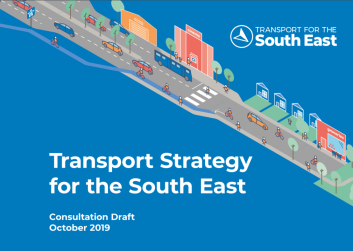 There are many failings in transport, especially for cycling. The total lack of strategy is plain at all levels.

Transport for the South East (TfSE) wants to plan strategic transport across the South East and is consulting from now until 10 January 2020. The consultation documents are here

TfSE draws together Councils, Local Enterprise Partnerships, businesses, transport providers and some stakeholder groups.  What are they going to come up with? The scenario put forward by the TfSE results in a reduction in cycling and walking by 7%!

It is essential that sustainable transport and cycling infrastructure gets much more investment if we are ever going to have a cycle-friendly region.

Our Space for Cycling ride at the Labour Conference was a great success!

Shadow Secretary of State for Transport, Andy McDonald MP for Middlesbrough, made a pledge to increase funding to £10 per person per year for cycling and walking if a Labour government were elected.

Many thanks to Andy for coming and also to Stephen Morgan MP for Portsmouth South and Fabian Hamilton MP for Leeds North East (below).

We were also very glad to welcome two Brighton and Hove City Councillors who arrived on bikes, both from the Green Party: Councillor Alex Phillips and Councillor Dick Page.

Many thanks to Tom Guha from Cycling UK for arranging the speakers. Cycling UK’s press release here.

Don’t forget the “Space for Cycling” ride during the Labour Party Conference in Brighton on Monday 25th September at 6.30 pm.

We are organising the event in collaboration with Cycling UK, the national cycling charity.

It’s not party political, but we do want to ensure that cycling is on everyone’s political agenda!

We are inviting Labour Party delegates, Brighton and Hove City Councillors and MPs from every party to join us.

Meet opposite the Brighton Hilton Metropole Hotel on the seafront cycle track on Monday 25th September at 6.30 pm.

We will have photos and a mini ride to Hove and back.

Come along and impress the Labour delegates with your enthusiasm for cycling! 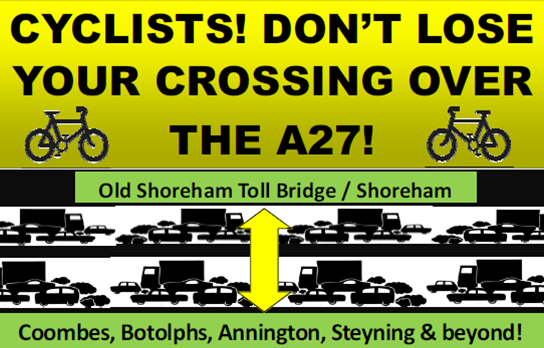 STOP PRESS! EASY WAY TO OBJECT: Email planning@adur-worthing.gov.uk  quoting planning application AWDM/0961/17. You must include your full name and address.

Please spread the word! Print and distribute if possible!

The crossing over the A27 from the old Shoreham Toll Bridge to Coombes Road will be removed and the Old Shoreham Road junction will be permanently closed if the New Monks Farm proposals are approved!

The proposed alternative crossing for cyclists involves at least a 1km detour with four new sets of traffic lights over a new roundabout and an upgraded A27.

Off-road alternatives have not been agreed and might prove non-viable. Meanwhile this major development would go ahead.

The plans are out NOW for consultation on Adur and Worthing Council’s website. The deadline is extended to 2 November 2017. Use the easy method to object by email given at the top of this post.

You can also comment on the consultation here but you will need to register, log in and find planning reference number AWDM/0961/17

See this flyer Please distribute if you can! Some suggested points of objection are below. Please feel free to change or add your own:

We’re up and running! Paul of South Coast Bikes delivered the BTN Bike Share bikes to their seafront locations and to many other points around the town. Starting from September 1st, these handy bikes will be available for hire. See BTN Bike Share for all the details. See the Council news release. Happy cycling!

Highways England is consulting on proposals for the A27 East of Lewes. The consultation closes on Thursday 8 December.

Proposals include a continuous route for cyclists from Lewes to Polegate, a route which includes Firle, Middle Farm, Charleston, Selmeston, Berwick, Drusillas and Wilmington. These are familiar names for anyone who cycles out of town into East Sussex. To view the consultation documents. look HERE and to complete an online consultation form look HERE.

If you would like to add your voice to support these improvements, please follow the links above to the consultation pages.

It has been a packed week for the council as ever, with a few bike related things floating to the surface.

Last Wednesday the road safety team held an exchanging places event, where cyclists get to swap with bus drivers to see what the other experiences. Anyone hoping that this would involve Stagecoach drivers being put on bikes and chased up North Street by a Deliveroo cycle courier behind the wheel of the number 49 will have  been disappointed, as the main thrust of this sort of thing is that cyclists sit in the driving seat of a large vehicle to better experience all the things that the driver cannot see, and through this process understand how they may be squashed without the driver noticing. And what they might do about it.

Being autumn, the council road safety team are also running their annual Be Seen – Be Bright awareness campaign reminding people walking and cycling about the advent of winter and the importance of being seen in the dark. They will be out and about advising cyclists to get lit, and if you head to their facebook page there is the chance to enter a draw to win some lights.

The big council news of the week has been the resuscitation of the Valley Gardens Scheme – a proposal aiming to improve the stretch between the Aquarium roundabout and the Level, which involves shifting private vehicle movements to the eastern side of the gardens, simplifying the crossings and leaving the western side just for public transport and access.

The scheme has been on the cards for years, but was substantially developed by the last council. When the change of administration happened in 2015, the new administration called a pause because they wanted to review the scheme – particular the traffic modelling, and this done, it is now back on track. this is a good thing, as it promises to provide high quality protected cycle routes along the north south length, as well as improved east west connections.

The final scheme has not yet been announced, and some consultation is still taking place, and Bricycles continue to participate in this and be represented as opportunities arise. The word from Tony, who has been attending consultation events is that it looks good for cyclists, although there are some aspects of the design that may require tweaking. watch this space.

And finally….another award for the Lewes Road scheme. Last Friday, the council Transport Team celebrated scooping first place as Transport Local Authority of the Year in the National Transport Awards. Congrats to the council and hoping that this inspires them to continue developing safe and accessible transport options for all. 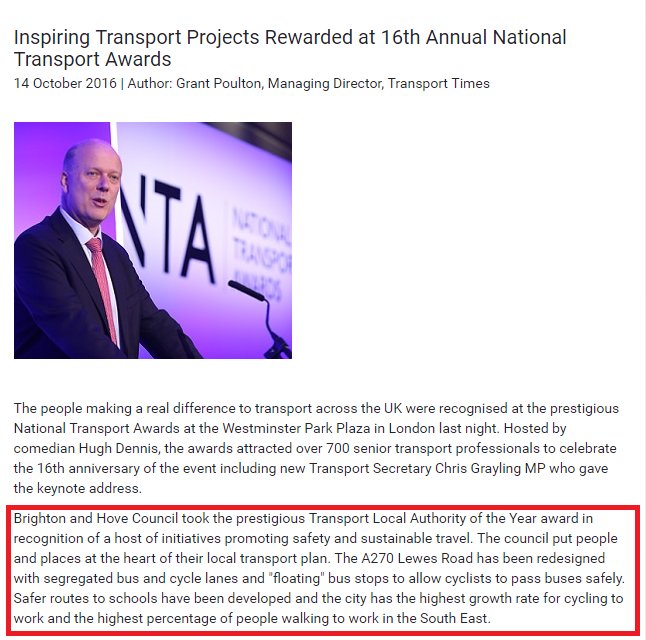